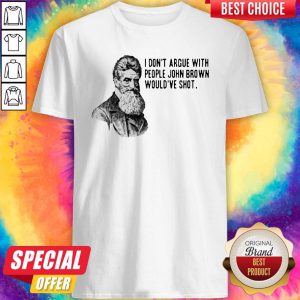 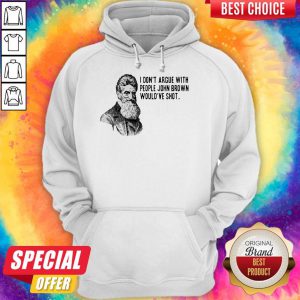 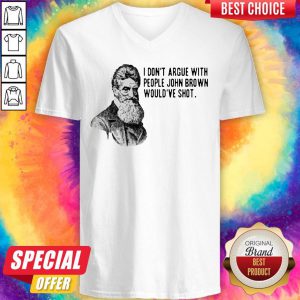 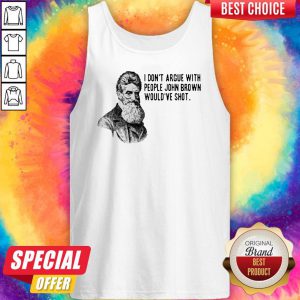 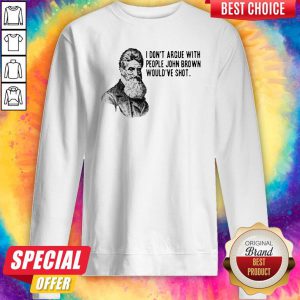 The podcast Behind the Bastards did a pretty impressive breakdown on John Brown. Turns out he probably wasn’t a good man so much as he believed incredibly strongly in the notion that white folks and black folks were equals, to the point of willingness to commit murder. Outside of that one (in my opinion redeeming) quality, apparently he was a pretty shit dude. I think his cause was both noble and just. I respect his actions and I’m glad he made his mark on history. But I think it’s possible for absolute prices of shit to do good things. I don’t think it makes them good men, and I feel like we as a society need to be able to take a more nuanced look at people or situations. From what I understand he was an abusive man, a religious zealot, abandoned Official I Don’t Argue With People John Brown Would’ve Shot Shirt his family for long stretches of time, had some questionable opinions about women and was an absolute dick to be around.

But he also accomplished great things. To say he was a great man sort of washes over who he was because we agree with and support one aspect of his life. I think it’s not unfair to say he was a complicated fellow, and from what I know a generally shit human, except that he fervently and violently upheld his belief that all men were in fact equal. So yeah, not a good dude, who did good things. An anti-hero, if you must. We have tons of examples from the history of shit people doing good or even great things, and to pretend that they were good people diminishes what a truly good person actually is let’s say I spent the first ten of my life murdering and raping. Just constantly. Walk out the door and started raping. If I wasn’t raping, I was murdering. But then one day I was like “you know, I’m gonna solve world hunger” and I spent the next 50 years feeding the poor, helping to develop sustainable food practices, teaching people how to have healthy relationships with food, and at the culmination of Official I Don’t Argue With People John Brown Would’ve Shot Shirt my life, I helped to eradicate starvation across the planet.

That’s a great and noble accomplishment, but does that make me a great man? The murder and rape would say no. I agree that just because someone does something good it doesn’t necessarily cancel out everything else but I think the scale is really important. Like I really think you can’t say he wasn’t a good person because although he saved 1000s of lives he wasn’t pleasant to be around and wasn’t a good husband and father. I’m not saying he’s perfect and I’m sure he had a lot of regressive views as did probably everyone else in the early 19th century but I don’t think it’s particularly nuanced to say someone was bad just because they did some bad things. You make a solid point, turning my logic Official I Don’t Argue With People John Brown Would’ve Shot Shirt against me like that. It’s probably as unbalanced to call him the bad cause of a few bad traits as it is to call him good for his abolitionist actions.